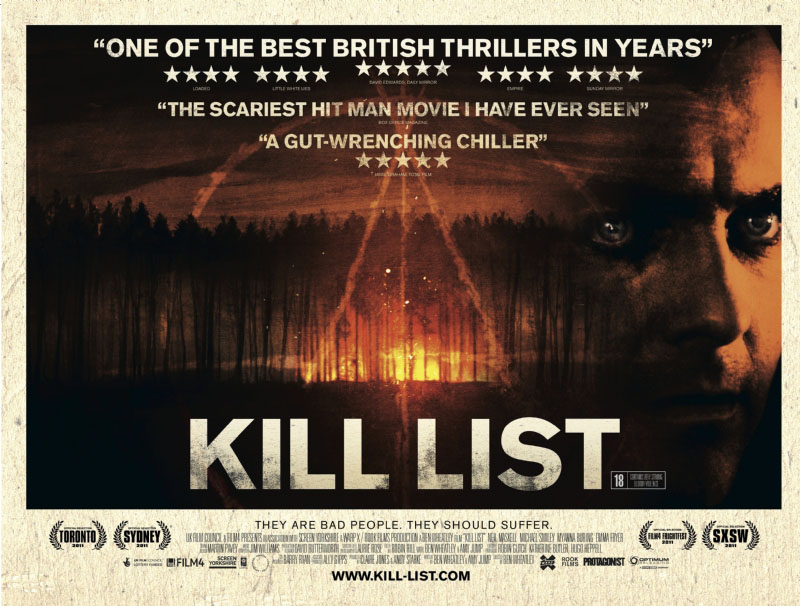 I’ll be honest, I was nervous about seeing Kill List. I’d caught snippets of reviews, not too much, just enough to know I should check it out. But it was the uncharacteristic words of caution by the critics that made me uncomfortable. Words like “brutal”, “disturbing” and “unpleasant” were being used as much as “superior”, “powerful” and “important”. There were warnings like “not for the squeamish”, and “strong stomachs”. Film critic Nigel Floyd almost walked out half way through due to “unbearable tension”. So to say I had mixed feelings about seeing this film was an understatement.

I’m not averse to scary films, nor gory ones for that matter (and this is both). But what makes this film so disturbing, and it is disturbing, are the long periods of cranked up tension followed by short sharp shocks, all played out in brutal realism. From the word go the odd camera angles and minimal music create a deeply unneasy atmosphere. The innocent act of the Dad being woken by his young son becomes unsettling. A dinner party with friends becomes uncomfortable to watch. It’s like a Mike Leigh film directed by Stanley Kubrik.

To say too much about the plot would spoil the effect – I think I benefited by knowing very little before I saw it. Kill List is a physically draining and uncomfortable watch, and if you allow yourself to be submersed it will leave you deeply troubled by the end. It is the top class performances, great script and a superb use of sound that makes this a very special film, and after years of working at The Viral Factory Mr Ben Wheatly has finally put himself firmly on the growing list of world class British Directors. But I’m certainly not in a rush to put myself through it again and I’ll leave it to Tim Robey from The Telegraph to explain perfectly why I couldn’t leave my seat until after the credits rolled: “The less you know in advance, the more potent the feeling of being shoved head-first down a rabbit hole. What’s waiting at the end isn’t a bunny – it’s hideous.” Official trailer.