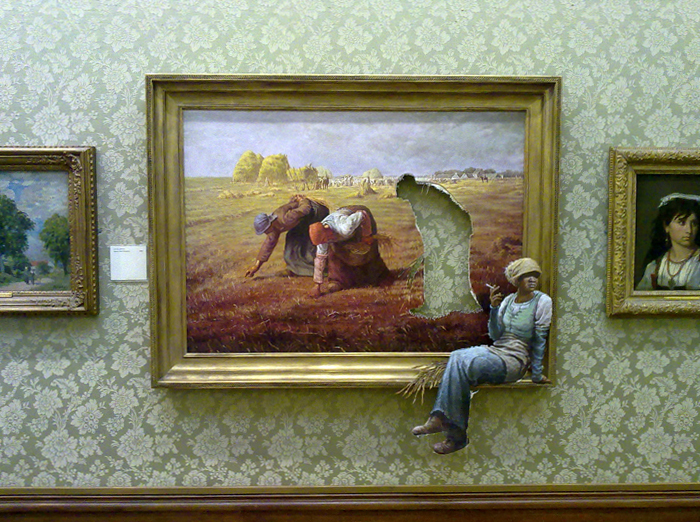 On the 9th June 2009 the prestigious Bristol Museum locked its doors. The staff were sent home, windows were blocked out and large trucks came and went. Three days later the museum re-opened, but instead of the usual classic art in the lobby, the public were greeted by a burnt out ice cream van. Banksy had taken over. His satirical statements on art, politics and ethics are once again on display. But as an exhibition? In an art gallery? Ive always thought that his art’s strength is it’s understatement; simple, clever ideas stencilled onto walls. Surely putting these ideas in a museum is like a fanfare for a quick joke, or a gilt frame on a greetings card. But when I spot one particular canvas of a rat defacing an original Damien Hirst I realise this is not simply a display of his work. The whole exhibition seems to be a huge fart in the direction of the modern art world. In Banksy’s own words; “Maybe one day graffiti art will hang in lots of museums and be viewed in the same way as other modern art, although personally I hope it never sinks that low.”

Banksy’s audacious art fart runs until the end of August 2009. Miss it at your peril.